During early Spring, swathes of wild daffodils (Narcissus pseudonarcissus) spread their yellow blaze through meadows, woodland and field margins. They reach their greatest concentrations on the Herefordshire / Gloucestershire border around Newent, Dymock and Ledbury; ‘the wild daffodil centre of England’. But the wild daffodil is also patchily distributed throughout Herefordshire. 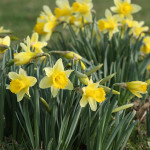 The wild daffodil, with a delicacy and freshness that garden varieties don’t possess, has a distinctive golden yellow trumpet surrounded by a paler outer whorl of six segments. Perhaps, because of their abundance where they occur, they tend to be taken for granted here, they can only be seen in numbers elsewhere in pockets of the Black Mountains, south Devon, the Sussex Weald, Ferndale in Yorkshire and the Lake District. Once one of the most widespread and common of wild flowers until the mid-nineteenth century, they then slipped into a rapid decline across central and eastern England. Originally a woodland plant, they have persisted on cleared and damp sites or spread from there into old improved grassland.

Nowhere is the wild daffodil, or Lent lily, more popular or better known than in the ‘Golden Triangle’ of Newent, Dymock and Ledbury on the Gloucestershire-Herefordshire border. In the 1930’s, the Great Western railway ran ‘Daffodil Specials’ from London for tourists to walk amongst the golden throngs and buy bunches at farm gates. The ‘Daffodil Line’ to Dymock was closed in 1959, but the flowers are still celebrated at ‘Daffodil Teas’ held in various parish halls in March.